Posted By politisktinkorrektpappa on Apr 29, 2016 | 0 comments

This is the story about the anti-hero that still saves the day and get the girl in the end!

Twentieth Century Fox Film Corporation and Marvel Entertainment are certainly scraping the barrel now as a last and final resort to cash in whatever’s left to cash in after Iron Man, Captain America and the rest of the Avengers are about to reach their respective best-before-dates. This was blatantly obvious with “Ant Man” and whatever reboot of “X-Men” we’re at nowadays…

…and then they go and pull this off!!! 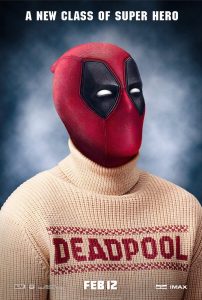 I was far from convinced that they were going to succeed with Deadpool simply because he is such an anti-hero and so different from anything else the Marvell-universe has squeezed out in the past, but they really hit the jackpot here and casting Ryan Reynolds as Wade/Deadpool was a stroke of genius because he totally pulls it off – and then some!!! 😀

If you’re not into toilet-humor and way below the belt comedy this is not something for you, but if this appeals to you then drop whatever you’re doing and watch Deadpool now!

In the movie we get to see how Wade is transformed into Deadpool after getting a terminal diagnosis and eventually agrees to some really dodgy medical procedures – which’ll give him super (read; mutant) powers that will defeat the terminal illness. For a short while the toilet-humor takes a brief timeout when Wade and equally estranged girlfriend Vanessa (perfectly done by Morena Baccarin) goes through the reality-check of how to tackle the imminent soon to be deceased Wade, but even as Wade is almost about to cave in the humor never stops!

The movie has been out long enough that I’m not going to be as careful not to spoil anything, but Deadpool is Deadpool and you know it’s going to be more crazy than Monty Python guesting Saturday Night Live with Rowan Atkinson directing the whole ordeal in character of Mr Bean!

The movie is full of really funny references to X-Men, and especially the lack of them due to it’s (the movie) low budget…Very funny! The action is top notch and the dialogue is 100% Deadpool and Ryan should get an Oscar for his part without a doubt!!!

There are too many funny separate incidents and blatantly obvious funny references and jokes in this movie to even begin to reference some of them, but I’m convinced we will se a lot of Deadpool in the future and I hope they keep the same, almost cheap-ish, raw humor and acting and not try to do something serious because that won’t work.

I won’t spoil anything more here because this movie deserves to be seen without too much prior knowledge, and stay away from the trailers as well if you can in order to get everything right in your face! Me and the boys laughed so hard when we watched it the first time that we had to paus it several times in order not to miss anything, but even as we watched it the fourth time we discovered new references and punch-lines so you’re in for a treat if this is your cup of tea!

The rest of the cast carry the movie really well and Ronna Kress who was in charge of the casting – bloody well done!!!

If you’re still reading this that means this appeals to you so stop reading and start watching Deadpool instead because nothing I write can do justice to this act of genius!

I can’t give it 5 out of 5 simply because that’s reserved for the really special ones, and so far only one title has earned that position (Despicable Me), but a solid 4 out of 5 is a no-brainer!

p.s One of the best Deadpool quotes from the movie:

Wow, this is such a big house, but I only ever see the two of you here. It’s like the studio didn’t have enough money for any more X-Men…